It’s very tempting to see robots and other shiny tech toys as fantastic motivators for STEM education. After all, who doesn’t love playing with cool toys? Unfortunately this kind of hardware has huge drawbacks in the classroom. To show you why, let me tell you a story.

On the weekend I took my kids to Oz Comic Con. My 11 year old, Jen, is a HUGE tech nerd and loves all things hardware, software, mathematical, and, of course, STAR WARS. Dressed as a Jedi and wielding a lightsaber, Jen was magnetically drawn to the stall selling star wars drones. Jen had been saving for Comic Con for months, so the $50 cost, while more than they have ever spent on anything before, was well within their reach.

I did a quick bit of online research and it seemed like a good buy.

Behold Jen’s X-Wing in all its glory. 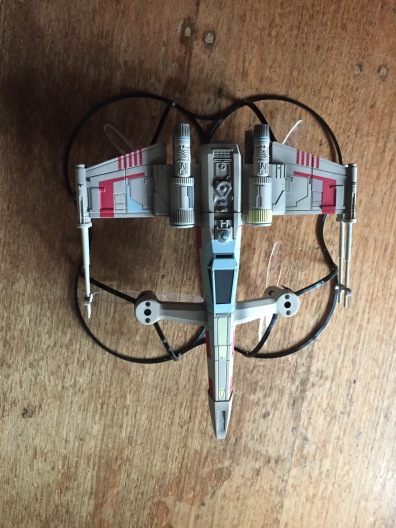 You can imagine the excitement when we got it home, but we were out to dinner that night and didn’t have time to unbox and charge it. The next day Jen bounced out of bed and went straight to the box. Eating, drinking, and other necessities of life were not on the agenda, so it was lucky it was a public holiday and I didn’t have to try to get them to school.

Once charged (the drone), batteries installed (the controller), and with the beginner-pilot’s safety cage installed, we fired it up. The controller even buzzed when we inserted batteries and had Yoda saying “feel the force!”. The excitement was INTENSE. The instructions said to power up the controller and the drone, flip the left hand lever up and down, whereupon it would beep, and the flashing lights would then stop flashing to show that the devices were synced.

But there was a catch. Beeping occurred as expected, but the lights on both devices continued to flash. We powered both devices off and on again. We tried different batteries. We even went shopping for new batteries. We spent all day trying to get the damned thing to work, to no avail. 3 days later it still didn’t work and we were waiting for tech support from the drone company to reply to our emails.

Now you may think we were doing something wrong – and perhaps we were – but I have a PhD in Computer Science, and my husband is an Electrical Engineer. If we can’t make it work, what hope does your average teacher have?

Unlike with programming, a student, a teacher, and even an electrical engineer have very little hope of debugging a device such as this one, because there is no feedback. There’s no way of knowing its internal state. Short of taking the device apart and resoldering each of the connections and testing each component (not skills taught in your typical primary education course last I checked), there’s no way to troubleshoot these things.

Whether Robot, Raspberry Pi, or Arduino, hardware all suffers from these issues. There’s a significant chance that they won’t work out of the box. Even if they do, connections come loose and they might stop working mid-lesson, or not work next time they come out of the cupboard. And what we teach kids with these kinds of intensely frustrating experiences – when they are trying to do the same things as everyone else, but for them it doesn’t work – is that these problems are insurmountable. That they have no control over technology, no power to fix it when it breaks, and no way of understanding how it does what it does.

These are not the lessons we want to be teaching our kids.

*Update: The company got back to us the day after I wrote this, and very quickly replaced the drone. 10 days after the initial purchase we have a drone that works – but Jen’s enthusiasm – and confidence – has taken a severe battering.

1 thought on “Why robots are a disaster for tech education”